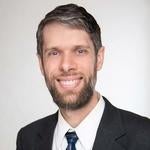 Benjamin A. Stark is the Motions Counsel for Barrett & Farahany. A skilled employment law attorney, Benjamin fights to protect employees' rights in matters such as discrimination, harassment, retaliation, and overtime pay.

Benjamin has won every matter he has ever taken to trial. In June 2015, he served as trial counsel in the first case in the nation to go to trial under the Genetic Information Nondiscrimination Act (GINA). The jury awarded $2 million to his client in that case: Jack Lowe and Dennis Reynolds v. Atlas Logistics Group Retail Services (Atlanta), LLC.

Benjamin is motivated to stand with the “least of these” - people who generally don't have a voice in society or the ability to defend themselves. He is driven to help them and provide them with a voice. Since joining Barrett & Farahany in June of 2012, he has served as Lead Counsel on dozens of cases in state court, federal court and arbitration.

In his role as Motions Counsel, Benjamin specializes in handling motions for the other attorneys in the firm, thereby freeing them up to focus on litigation and negotiation. Because he specializes in responding to employers' Motions for Summary Judgment and Motions to Dismiss, Benjamin's success rate in fighting such motions is significantly above average. In this way, Benjamin fights to ensure that all of the firm's clients get their day in court.

Before joining Barrett & Farahany, Benjamin worked for the U.S. Department of Labor, Office of the Solicitor (SOL) for more than five years. He was initially hired for DOL as part of SOL's Honors Program. He was the first attorney in that program to work in a regional office (Atlanta). In addition to protecting employee rights in matters such as discrimination and overtime pay, Benjamin enforced workplace safety laws such as the Occupational Safety and Health Act and employee benefit protections such as Title I of the Employee Retirement Income Security Act. While employed by DOL, Benjamin drafted policy memos used by the entire agency, negotiated nationwide settlements with major corporations and won several trials.

When he is not practicing law, Benjamin enjoys performing volunteer work through his church, North Avenue Presbyterian Church, where he is a deacon emeritus, watching movies, and spending time with his wife, Christy, and their sons, Jonathan and Joshua.