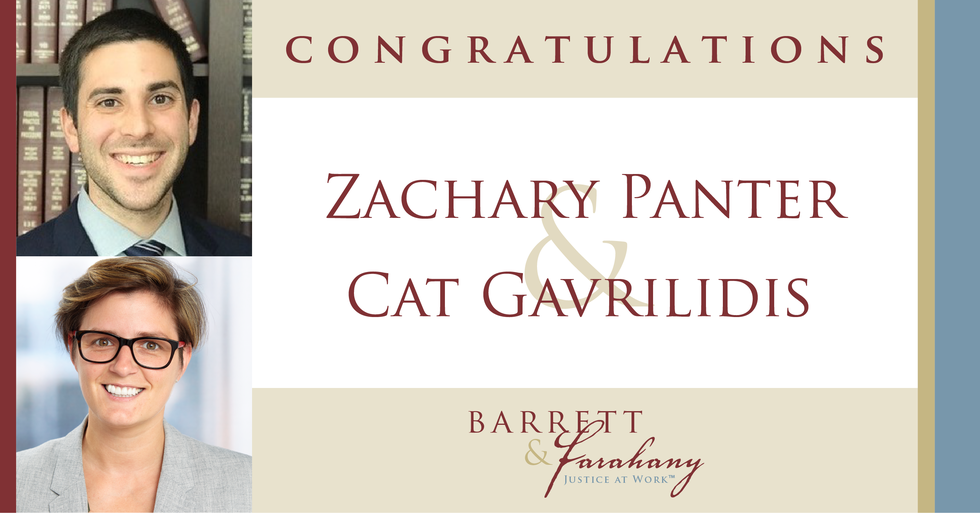 Barrett & Farahany congratulates Catherine Gavrilidis and Zachary Panter for passing the Georgia bar exam! Despite a month-long delay and a change from in-person to virtual testing due to COVID-19, Cat and Zack persevered.

While in law school, Cat interned with the DeKalb County District Attorney's Public Integrity and White Collar Crime Units and also clerked for another Atlanta-based employment law firm. She was a member of and coach for GSU's award-winning moot court team, served on the boards of the Association of Women Law Students and Phi Alpha Delta law fraternity, and was an Honor Court prosecutor and justice.

Zachary recently graduated from Emory University School of Law. He received the State Bar of Georgia Employment Law Section Award, an honor that is given to the graduating student with the most outstanding performance in employment law courses, and was a member of the Order of Barristers National Honor Society. He also served on the executive board of the Emory Moot Court Society and was a founding member of the Emory Civil Rights Law Society.

In addition to serving as an intern for another Atlanta law firm, Zack held two U.S. District Court clerkships. He clerked with the Honorable Amy Totenberg of the Northern District of Georgia as well as the Honorable Beth Bloom of the Southern District of Florida. Zack also interned with an administrative judge at the Equal Employment Opportunity Commission and with the City of Atlanta Public Defender's Office.

Once again, congratulations to Cat and Zachary! We are proud to have you as part of the Barrett & Farahany team.