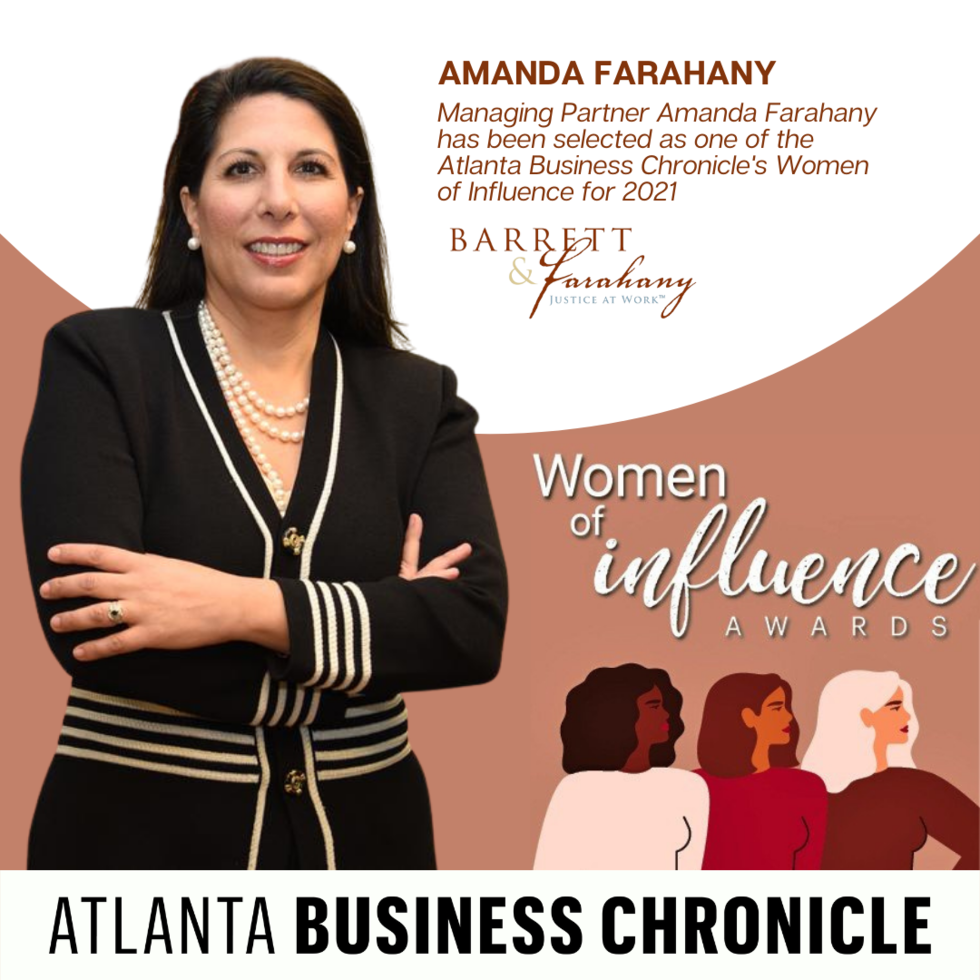 Barrett & Farahany is proud to announce that Managing Partner Amanda Farahany has been selected as one of the Atlanta Business Chronicle's Women of Influence for 2021. The prestigious award is given to 21 women who have not only succeeded in their careers, but also made a significant difference in their individual communities and in the overall Atlanta business community.

The ABC chooses the top 21 women from nominees across different industries and professions. In both professional achievement and community involvement, the ABC looks for women who have had a tangible impact. Each of the 21 winners will be celebrated at a networking reception and dinner on October 14.

As a tireless advocate for workers and their rights, Amanda exceeds the requirements for the award. She has dedicated her career as well as her personal time to fighting for employees and working to change laws on their behalf. Amanda has a reputation for taking on challenging cases and winning. Among those cases was a $2.25 million verdict in the first Genetic Information Nondiscrimination Act case, which was not only a win for her client but also secured genetic privacy for American workers. She attained the highest verdict on record ($5 million) in a Family and Medical Leave Act case, and in Georgia won the largest libel verdict for a single plaintiff.

While working on behalf of employees, Amanda has also had a significant influence on the growth of Barrett & Farahany in her role as managing partner. The firm has grown from a solo practice at its beginning to 18 lawyers in Atlanta today. Barrett & Farahany recently merged with the Fonteneau Firm in Birmingham, adding further expertise in civil rights, employment law, and discrimination cases as well as a presence in Alabama. Barrett & Farahany is the largest firm in the Southeast dedicated exclusively to representing employees.

In her personal time, Amanda serves as a member of the board of directors of political action committee Stand Up for Workers. The board identifies and supports candidates who prioritize employee issues, supports the nominations of judges who respect employee rights, and advocates for laws that advance the rights of workers.

Amanda has also worked to better the lives of those in her community and those facing crises in other countries. She is a founding member of Water-Life-Hope, a non-profit organization that provides clean safe water through building wells in Haiti. She is also a co-founder of the My Panda (Personal Assistants Next Door) app, which launched shortly before the COVID-19 pandemic. Amanda's goal in founding the company was to provide jobs for unemployed individuals in various metro-Atlanta communities, while at the same time providing necessary services to those who were isolated or shut in.

In addition to the Women of Influence award, Amanda was recently named to the 2022 edition of the Best Lawyers in America, a distinction she has held for the past five years. In 2019, Amanda was the publication's Lawyer of the Year in Employment Law for Individuals. She has held the Super Lawyer distinction for the past eight years and has also been named as one of Super Lawyers Top 50 Women in Georgia. She is a Fellow to the College of Labor and Employment Attorneys, the American Association of Justice's National College of Advocacy, and the Lawyer's Foundation of Georgia.

Congratulations to Amanda! For more information on Amanda, or if you have any questions about labor or employment matters, contact us today.

Kathy Harrington Sullivan is a Partner at Barrett & Farahany who helps potential clients understand the law, clarify their rights, and determine which steps they can take to protect themselves and their jobs.

Comments have been disabled.