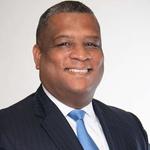 Ian E. Smith is Counsel with Barrett & Farahany where he helps employees rebuild their lives after they have suffered from adverse job actions. He exclusively represents employees in litigation brought under Title VII, the Fair Labor Standards Act (FLSA), the Family and Medical Leave Act (FMLA), the Americans with Disabilities Act (ADA), the Fair Credit Reporting Act (FCRA), and other federal and state employment statutes.

Before joining Barrett & Farahany in 2017, Ian's earlier legal career prepared him well to defend employees against their employers. He spent more than a dozen years defending some of the largest corporations in employment law matters at two of the largest international law firms.

Ian earned his law degree from Northern Illinois University College of Law and is a graduate of Morehouse College.

Ian lives in Atlanta with his wife, son, and Cooper, the family's Jack Russell Terrier.