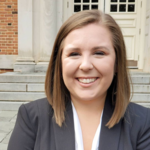 Lacey Wilson is a law clerk in the Alabama trial practice group of Barrett & Farahany as well as a third-year law student at Cumberland School of Law in Birmingham. She has worked in some area of the judicial system since age 15, and finds clerking for an employment law firm particularly fulfilling because of the opportunity to right the wrongs of employers through providing justice to workers.

She notes how negatively impactful harassment, discrimination, wrongful termination, unfair compensation, and other injustices are to hardworking employees who value their jobs. For workers who define themselves based on their employment role, adverse employment actions can be especially harmful, and Lacey wants to help see employers held accountable for their actions.

Lacey has also clerked with the Equal Employment Opportunity Commission's mediation department. Prior to attending law school, she worked at a personal injury firm in Tuscaloosa. Her first role in the legal system was as a clerk's assistant in the Marion County Circuit Clerk's Office in Hamilton, Alabama, a role she held for five years.

Lacey holds a Bachelor's degree from the University of Alabama, where she majored in criminal justice and minored in sociology. She is a native of Alabama and was born in Hamilton.