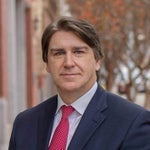 John Tomlinson came to Barrett & Farahany with 20 years of litigation experience, which, in addition to employment cases, included work on behalf of victims of occupational and environmental toxic torts, consumer protection lawsuits, and other disputes.

John was a leader in pursuing claims against BP Oil and other responsible parties because of the Deepwater Horizon oil spill of 2010. His efforts as part of the plaintiffs steering committee's economic damages team helped thousands of claimants in the Gulf Coast area receive compensation for losses incurred due to the spill. He was instrumental in the business economic loss model negotiations that resulted in the billion-dollar settlement used to compensate the plaintiffs.

At Barrett & Farahany, John's practice will focus on seeking justice for employees in the workplace. He will particularly help clients with Title VII of the Civil Rights Act, Family and Medical Leave Act, Fair Labor Standards Act, Americans with Disabilities Act, and Occupational Safety and Health Administration issues.

As an undergraduate at the University of Alabama, he played football and received his bachelor's degree in commerce and business administration with an emphasis in healthcare management. John is a graduate of Faulkner University's Thomas Goode Jones School of Law in Montgomery.

When not working, John is active at his church, and also volunteers and fundraises for several local charities, including Magic Moments, the Henry Tellis Foundation, Leukemia & Lymphoma Society, and March of Dimes. He enjoys spending time with his son Jet, hiking, flyfishing, horseback riding, and traveling.