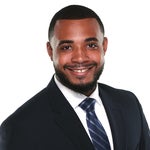 Benjamin J. Rollins is an Associate with Barrett & Farahany. Before joining the firm, Benjamin advocated for injury victims and recovered millions in settlements to compensate his clients for their pain and suffering. Benjamin's passion to fight for employee's rights in the workplace stems from witnessing members of his family experience race discrimination from employers in south Florida.

Benjamin earned his law degree from Atlanta's John Marshall Law School where he served as President of the Black Law Students Association and a member of the Mock Trial Team. Before law school, Benjamin attended the University of Central Florida where he received his Bachelor of Arts in Business.

Benjamin is admitted to practice in the Northern District Court of Georgia and the State and Superior Courts of Georgia. When Benjamin is not practicing law, he enjoys reading, hiking, and spending time with family.